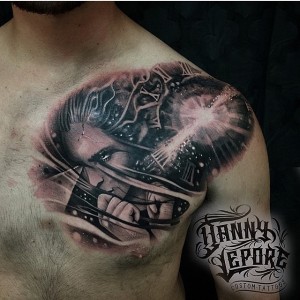 It started out as another page on the World Wide Web. Now, one of the most popular tattoos design sites has taken concrete shape on Staten Island. Dead center on New Dorp Lane, Bullseye Tattoos doesn’t have the facade of the average tattoo parlor. “I didn’t want it to look like bikers and criminals come in here,” said co-founder, Victor Modaferri.

He and his business partner Eric Iovino opened the shop just last December, and Modaferri says business is already doing better then expected—not bad for a guy who claims to have never taken a business course in his life. From the 18 year-old who’s been itching to get one legally, to a 65 year-old woman who wants to walk on the wild side, the shop is attracting all types of people to come see what tattooings all about.

However, the two native Staten Islanders had become successful tattoo artists years before the shop opened. Graduates of the Fashion Institute of Technology, they’ve been designing tattoos since 2001—before Modaferri even had any tattoos (he now has five). He says getting off the ground wasn’t easy. The duo started off selling sheets of tattoo designs, known as “flash”, to parlors through eBay. Modaferri says the business really took off when they marketed the flash in bulk (so to speak), selling 50 sheets at once for a discounted price to tattoo shops and supple companies.

In 2002, they launched bullseyetattoos.com. The innovation allowed people to shop for tattoos at home and was the only site offering such a service at the time. Customers can log on, buy their tattoo design online, print it out, and bring it to their local parlor to get inked. Modaferri and Iovino are still the two primary designers, although more than 100 artists all over the world design for Bullseye. Google the word “tattoo” and bullseye is among the few choices on the first page.

“We get about 10 million hits and 35,000 unique visitors everyday,” Modaferri said.

Now, local customers are printing out their tattoos and bringing them to bullseye tattoo’s location on New Dorp Lane. While the Shop’s owners are usually designing and running the day-today business, they say their reputation in the industry is attracting some of the country’s most talented tattoo artist to come and work for them.

One featured artist is Shane O’Neill, who has garnered national attention in the industry for his portrait work. O’Neill comes up to Staten Island from Delaware once a month to take customers…by appointment only.

Tattoo and piercing artist from all over the country are also flocking to work at the shop. “The company has a solid name behind it,” said Pete Carreno. Now one of Bullseye’s Main tattoo artists, the New Jersey native used to be a partner in his own tattoo shop in West Palm Beach Florida. Looking to move back up North, he took the shop’s opening as the opportunity to come back home.

Bullseye Tattoos is still a community business and it’s currently giving one Islander the opportunity to practice his craft. South Shore resident, Eric “Deuce” Goldenberg is a piercing apprentice. He says it took him more then a year to find a place that would even give him the chance. For now you can see him working the cash register or cleaning up the shop. He says he spends a lot of time “looking for guinea pigs,” as most of his customers, thus far, have been friends willing to let him practice on them.

While there are no immediate plans to open a second shop, the owners say it’s always a possibility. Right now, they have other ventures at hand. Bulleye has been selected for the third year in a row to design a limited series of tattoo designs for Bic lighters. They’re also coming up with tattoo design for cell phones, i-Pods, and other electronic staples. They are also launching a clothing line, which comes out in August and scheduled to debut at the magic Tradeshow in Las Vegas.

While they’ve got a lot on their plates these days, Modaferri and Iovino say they are glad to be keeping bust. When looking back on their days of called themselves “starving artist,” working dead-end jobs to pay the rent, they say they’re appreciative to have jobs they enjoy waking up in the morning for. Modaferri said, “if Bullseye were to ever fail, I would not go out and get a real job.”