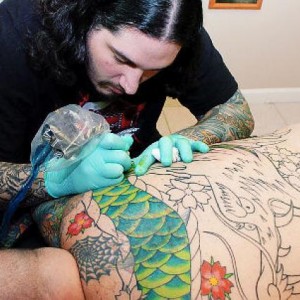 When artist Eric Iovino wandered into a city tattoo shop a decade ago, he had no idea how deeply the ink business would get under his skin.

The Staten Island native had studied at Manhattan’s Fashion Institute of Technology in the early ’90s in hopes of becoming a comic book illustrator. By 1996, though, comics giant Marvel had declared bankruptcy, and Iovino felt that his chances of finding work in the industry would be slim.

But at the tattoo parlors springing up just after the city relegalized the practice in 1997, Iovino began to see the writing on the walls in the form of flash, the designs that tattooists use as stencils for their work.

“Once I understood what it was, I knew how I could make money off of it,” said Iovino, 34, who co-owns Bullseye Tattoos, both a shop in Stapleton, Staten Island, and an online flash retailer.