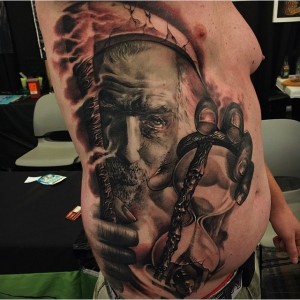 Staten Island, NY (PRWEB) May 22, 2008 — Tattoo enthusiasts who want to flick their BICs in honor of this form of body art will once again find themselves showing off the creations of two Staten Island-based artists. BIC Lighter has again selected artists from BullseyeTattoos.com to create the covers for its popular limited edition series dedicated to this distinct form of artwork.

Both Eric Iovino and Victor Modafferi will contribute to the project for the third year running. The lighter series was initially launched in 2006, featuring the works of both Modafferi and Iovino. The worldwide release was deemed incredibly successful and was subsequently followed up with another limited edition series in 2007.

As BIC poises to release its 2008 line, it has selected the same artists that have headed the project to success so far to create the 18 designs for upcoming release. This year’s lighters are expected to garner worldwide attention from tattoo enthusiasts.

“We are extremely honored to have our creations featured in the 2008 series,” said Iovino, co-founder and president of BullseyeTattoos.com. “The series not only gives us a chance to show off our designs, but it also pays homage to this ancient and popular form of artwork.”

Iovino explained that tattoo art has been a part of the human experience for centuries. In some cultures, tattoos are designed to show rank or belonging. In others, they are a form of self-expression, for example the somewhat recent popularity in lower back tattoos. In either case, tattoos represent the works of serious artists who simply choose to use a different type of canvas.

Because of the beauty of the artwork, the BIC series has been popular with both tattoo enthusiasts and art lovers alike, Iovino said. “You don’t have to get a tattoo to appreciate the intricacy and detail involved in many of these creations,” he said.

The limited third edition series will make its debut in early summer on a worldwide scale. This year’s lighter designs are distinct and different, Iovino said. Some of the tattoo designs enthusiasts can expect to find range from traditional tattoos, such as a skull and an anchor, to butterfly tattoos, to Asian-inspired themes like a geisha girl and dueling dragon tattoos.

“We’re very pleased with this year’s selection of artwork,” Iovino said. “The tattoo designs featured are going to blow fans of the series away.”

Bullseye Tattoos is an industry leader in tattoo flash artwork. Since its inception, Bullseye has become one of the most popular and heavily trafficked tattoo Web sites in the entire world.

The company specializes in the creation of downloadable designs for tattoo enthusiasts to buy and print out for personal use. Printed designs created by Bullseye can be taken to local tattoo parlors for permanent application by skilled artists. The driving concept behind Bullseye is to give tattoo fans a one-stop source for new designs to have artists apply.

Bullseye is located on the Internet at http://www.BullseyeTattoos.com. Visitors will find an extensive collection of ready-to-print tattoo designs and lots of information about tattoos in general on the site.